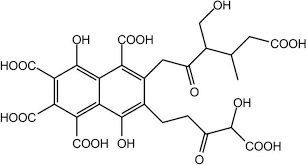 Fulvic acids (FAs) are a mixture of weak aliphatic and aromatic organic acids which are soluble in water at all pH conditions (acidic, neutral and alkaline). Their composition and shape is quite variable.

This high exchange capacity is due to the total number of carboxyl ( COOH) groups present. The number of carboxyl groups present in fulvic acids (FAs) ranges from 520 to 1120 cmol (H+)/kg. Fulvic acids collected from many different sources and analyzed, show no evidence of methoxy groups ( CH3) groups, they are low in phenols, and are less aromatic compared to humic acids from the same sources.

Humates are metal (mineral) salts of humic (HAs) or fulvic acids (FAs) Within any humic substance there are a large number of complex humate molecules. The formation of a humate is based on the ability of the carboxyl ( COOH) and hydroxyl ( OH) groups (on the outside of the polymers) to dissociate (expel) the hydrogen ion.